I haven’t written about Henlo on my blog before, so after celebrating his first birthday last week I thought I’d dedicate a post to introducing you all to our spiky little guy…

Henlo is an African Pygmy Hedgehog, who we’ve owned since James gave me him for my birthday in January this year. It was honestly the best surprise ever! He was bought from a breeder who lived up North (I’m not entirely sure where!) – she drove him down to Bristol with his cage and everything James needed to get started. I wasn’t allowed in his kitchen for a week which I did find very, very weird. Now I know why! His birthday is 01/12/17, so we got him when he was about 6 weeks old.

When we got him he still had his baby spikes so was quite easy to handle, but he soon started to shed these which made him a very grumpy boy indeed. He never really grew out of the grumpiness, despite us trying our best to get him used to our company. Hedgehogs are solitary animals, so they are very nervous and unsociable until socialised. They have bad eyesight so heavily rely on smell, so it’s important for hedgehogs to familiarise themselves with their owners scent so they can recognise them and realise they’re not a threat.

I say this, but this was something we really struggled with (and still are). Henlo really wasn’t easy to get comfortable around us.  When hedgehogs feel like they’re in danger, they curl up into a ball to protect themselves and ‘huff’. Henlo is a VERY huffy boy. You walk past his cage, he huffs. Pick him up, he huffs. He’ll sometimes uncurl quickly and be fine, but sometimes he doesn’t feel like company so will continue to huff for a long time. This summer we were away, so Henlo went to live with James’ Mum for a few months. Whilst there, he definitely started to become less nervous. The arrival of a new kitten who was very intrigued by him meant he got used to having company, as the kitten would sit on his cage! We now have him back and are determined to finally get him properly used to us and being around us. We’ve been getting him out on the sofa with us each evening whilst we do work and watch TV, letting him run around the room (either on his own or in his ball). We even retried bath time, which wasn’t as traumatic as the last time we did before we were away! I’ve read so much on how to make hedgehogs feel less anxious, and it’s all about making sure they spend as much time with you and your scent as they can. So hopefully in time he’ll love me as much as I love him, and I’ll be able to get more cute pictures to show you all!

As for his name, yes he is named after the Henlo meme. We just thought it made a cute name, and James used to always say Henlo instead of Hello so it seemed fitting. If you haven’t seen that, I’ll just leave it here… 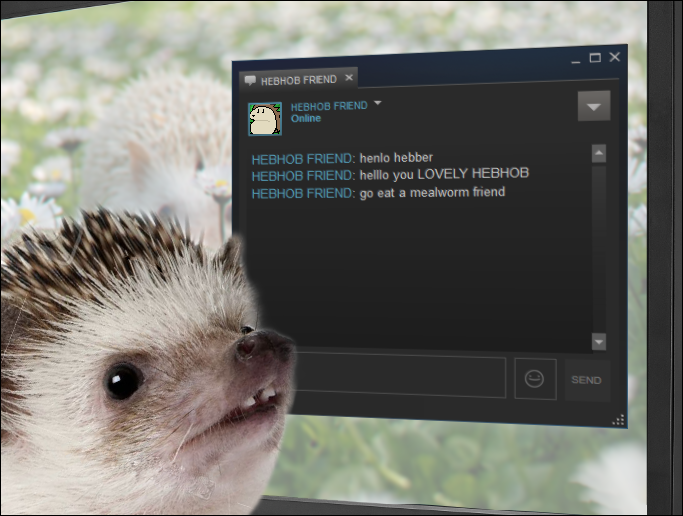 I hope you enjoyed reading my post & meeting my little hog! I’m hoping for him to become much more of a regular feature from now on.