During a weekend home before Christmas, we spent an afternoon in an arcade in Newquay and rediscovered our LOVE for Guitar Hero. Fast forward a month and we’re back down to celebrate my birthday with my family and we’re back in the same arcade, again. So when we got back to Bristol (us, alongside anything I could steal from home which included my brother’s old Xbox), we made it our mission to the game and guitars. Which ended up being much harder than we thought. After a couple weeks trailing through the Facebook sell page, Gumtree and Shpock we found a man selling two guitars and four games who lived in Clevedon. Half an hour drive from Bristol and near the sea? Sounded like my perfect idea of a Sunday day out.

I don’t know much about Clevedon other than One Direction shot their You & I video on the pier, but I thought it must be a pretty nice pier for them to pick this little Somerset seaside town over anywhere else in the world. After an easy drive and quick exchange of Guitar Hero (that’s the last you’ll hear of it, I promise), we drove down seafront to see the sites. 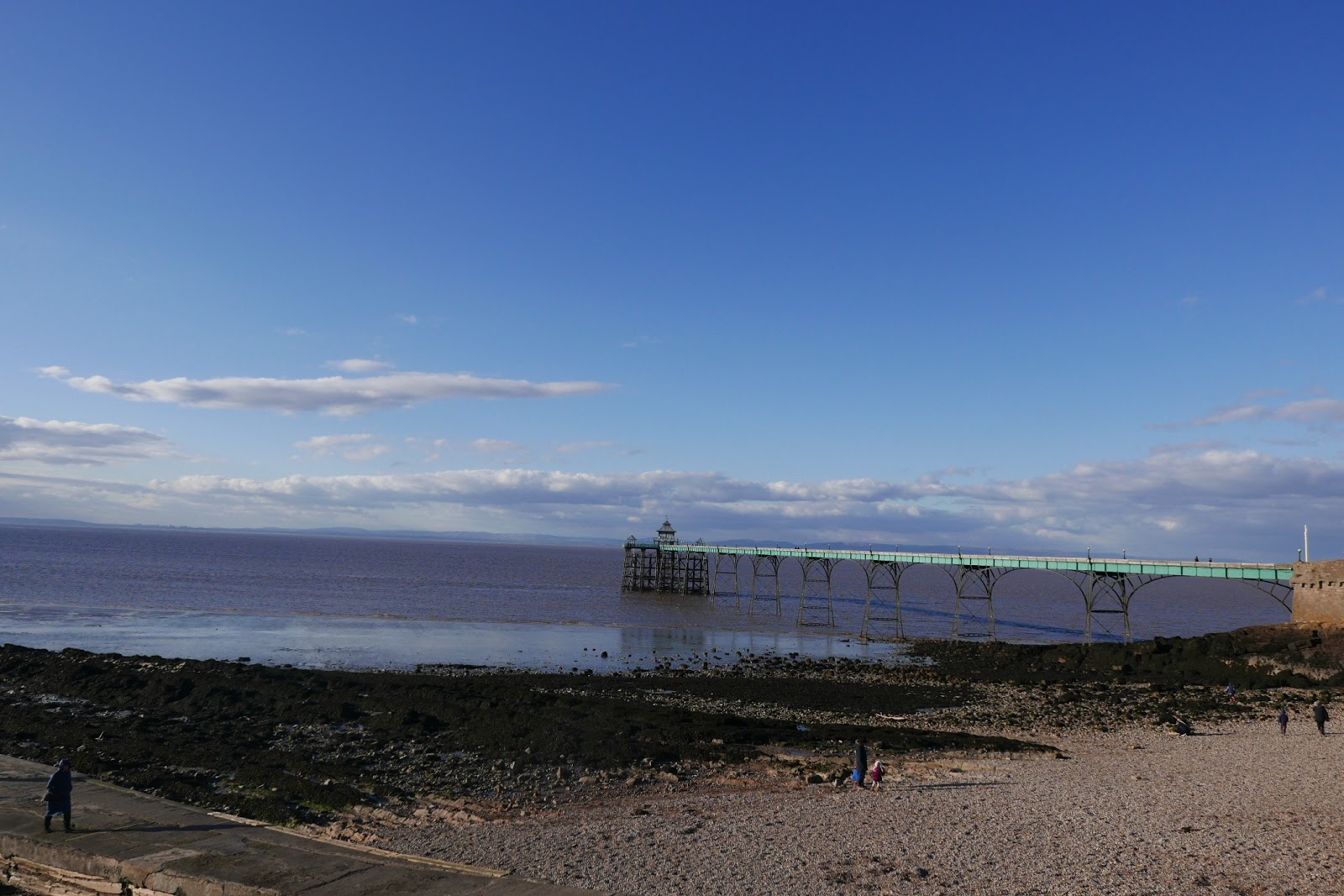 Being the first weekend of February, it was absolutely freezing, but we were assured we’d ‘brought the good weather’- at least it wasn’t raining! After parking (there’s a lot of free road parking but it took a few laps to get a free space) we headed into the little pier entrance/gift shop, where we paid £3 (yes, you can pay on card) for entry onto the pier which also included a small interactive museum. We headed upstairs to find out a bit about Clevedon and the history of the pier – including it’s original build and rebuild after falling down in a storm. 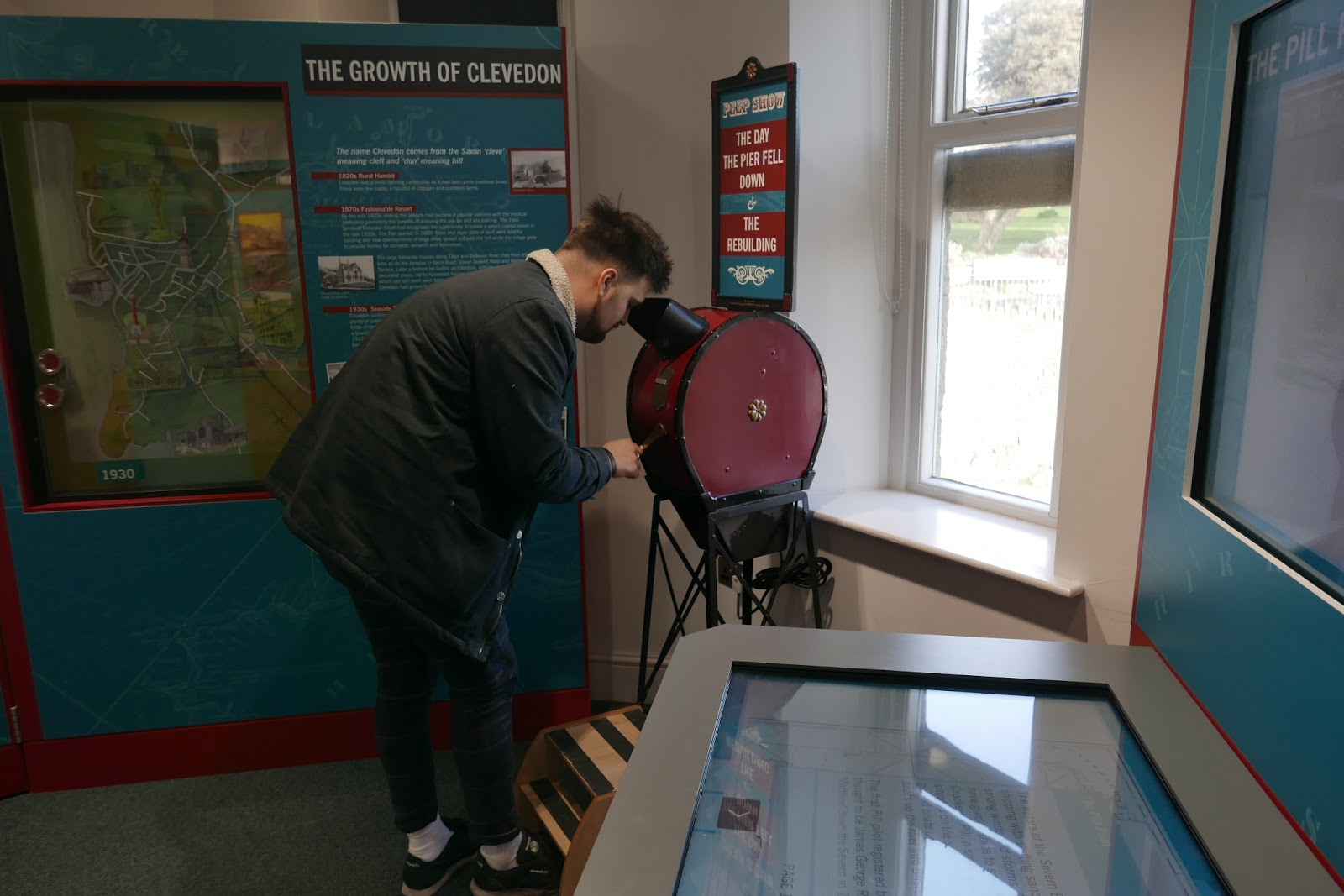 We decided to brave it out in the bitter wind and explore down the pier, which is pretty long (312 meters!). With beautiful Victorian buildings at the end and a view across the Severn to Wales, you can see why it was chosen as the site for a music video. Adorned on either side with plaques paying memory to those lost or special occasions, it had a very special feeling to it. Maybe it’s my Cornish roots but I really am happiest when surrounded with salty air and the sound of waves crashing nearby. The end buildings provide shelter from the wind and a café so you can warm yourself up with a hot drink. One of my favourite things was how popular it seemed to be for dog walkers – I met a lot of cute dogs! Including one very nice Italian greyhound who walked down the pier sideways because he didn’t like the gaps in the wood… 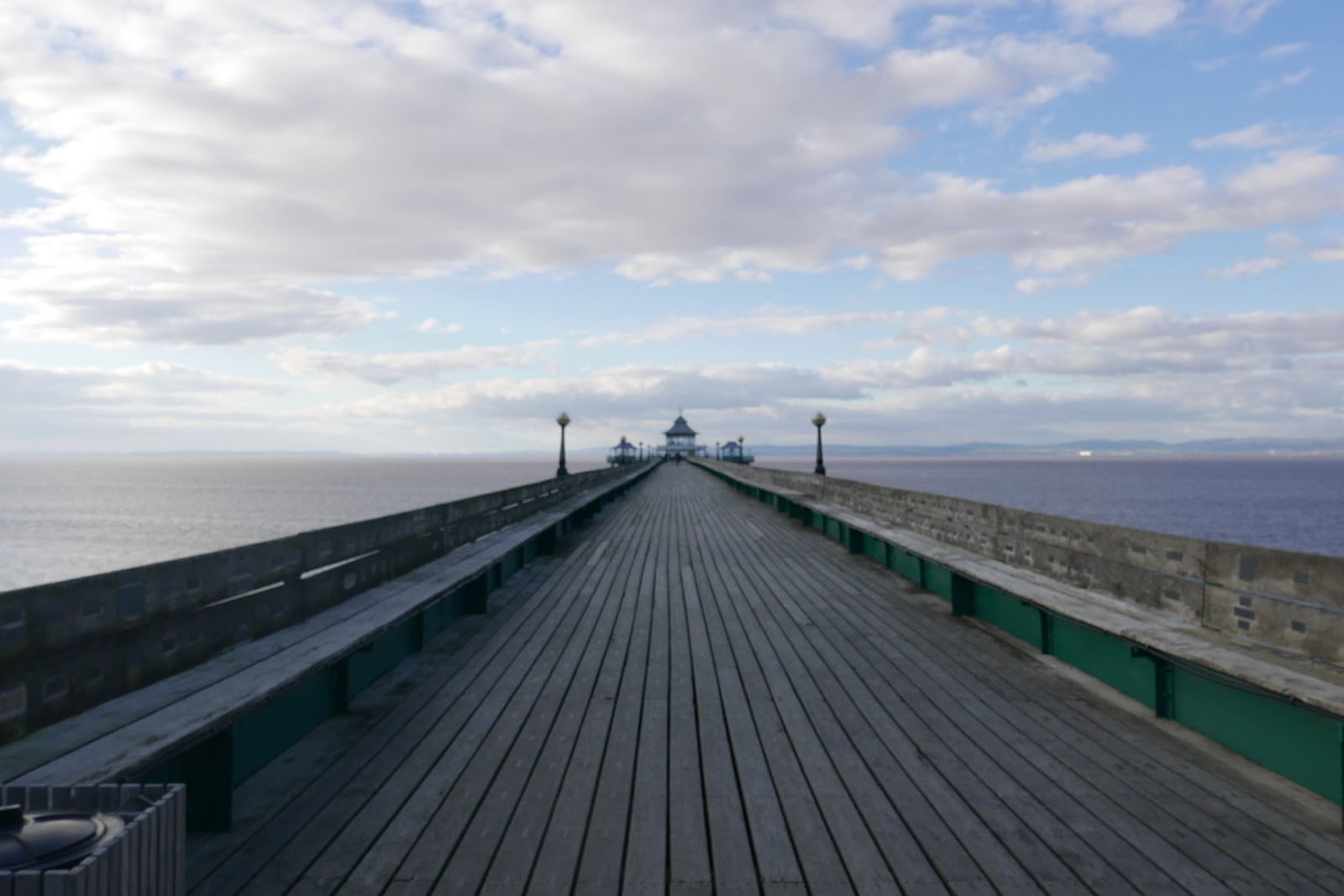 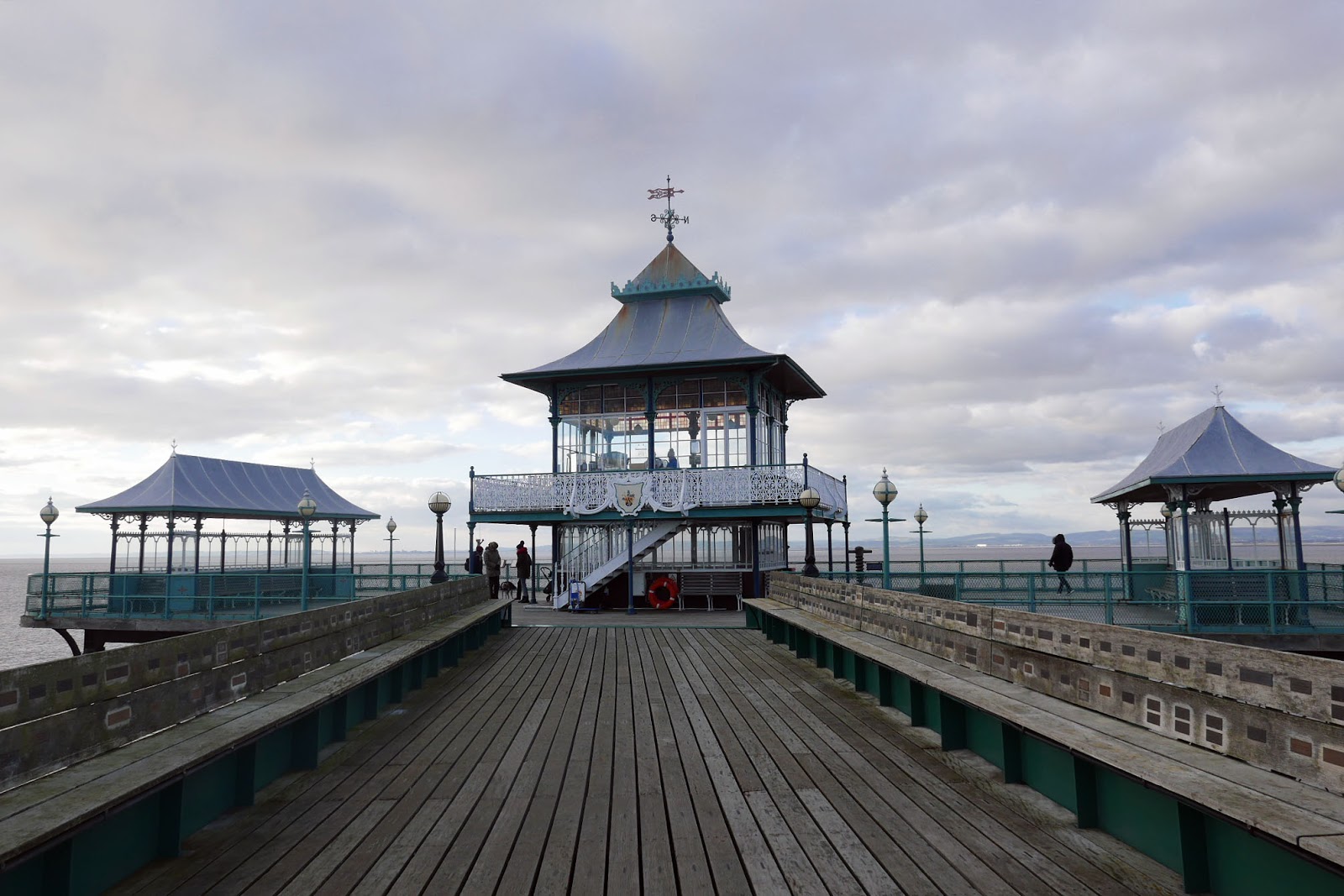 After our little adventure, we decided to head into the town centre of Clevedon to warm ourselves up with a roast. We drove down a road where pretty much every shop was closed (Sundays in Winter I guess, I’d like to go back in the Summer and see what it was like) and found what looked like a cosy little restaurant/pub called The Limehouse advertising roast dinners outside. We went inside and were lucky to get a table by the looks of things. We both ordered the Roast Beef and decided to play Scrabble whilst waiting for our food to arrive. 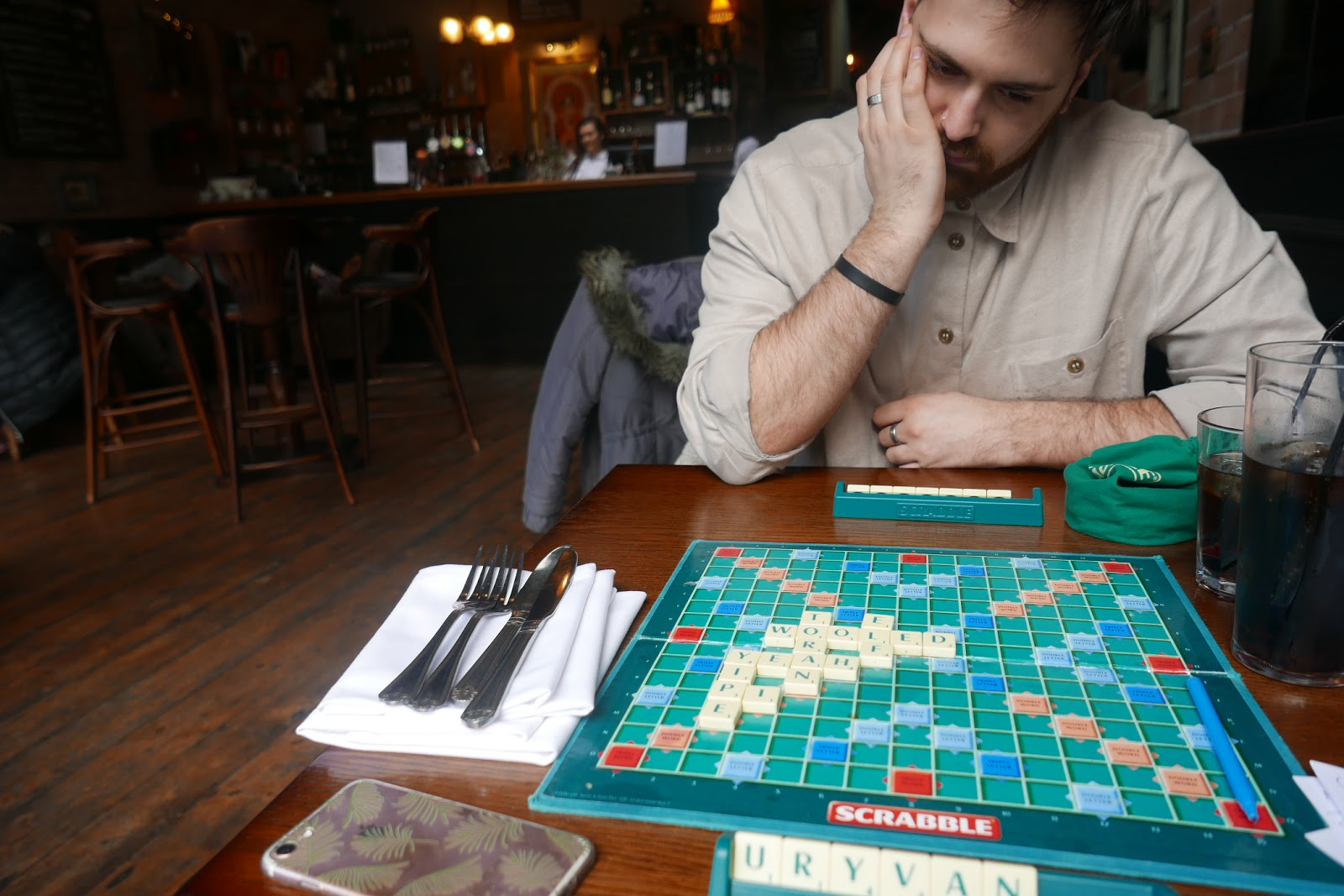 After a bit of an obsession with Words With Friends on Facebook over Christmas, I definitely thought I’d be better at Scrabble than I was… But it turns out it’s much harder when you can’t just put random combinations of letters together and hope they make a word that’s in the ‘Scrabble Dictionary’ or not – whether or not it was part of my own actually dictionary was irrelevant. I’ll be the first to admit that I’m a bit more competitive than I’d like and I wasn’t doing very well, so when our food came out and it was time to finish the game I was happy for it to be time to eat. And obviously, because the food looked AMAZING. 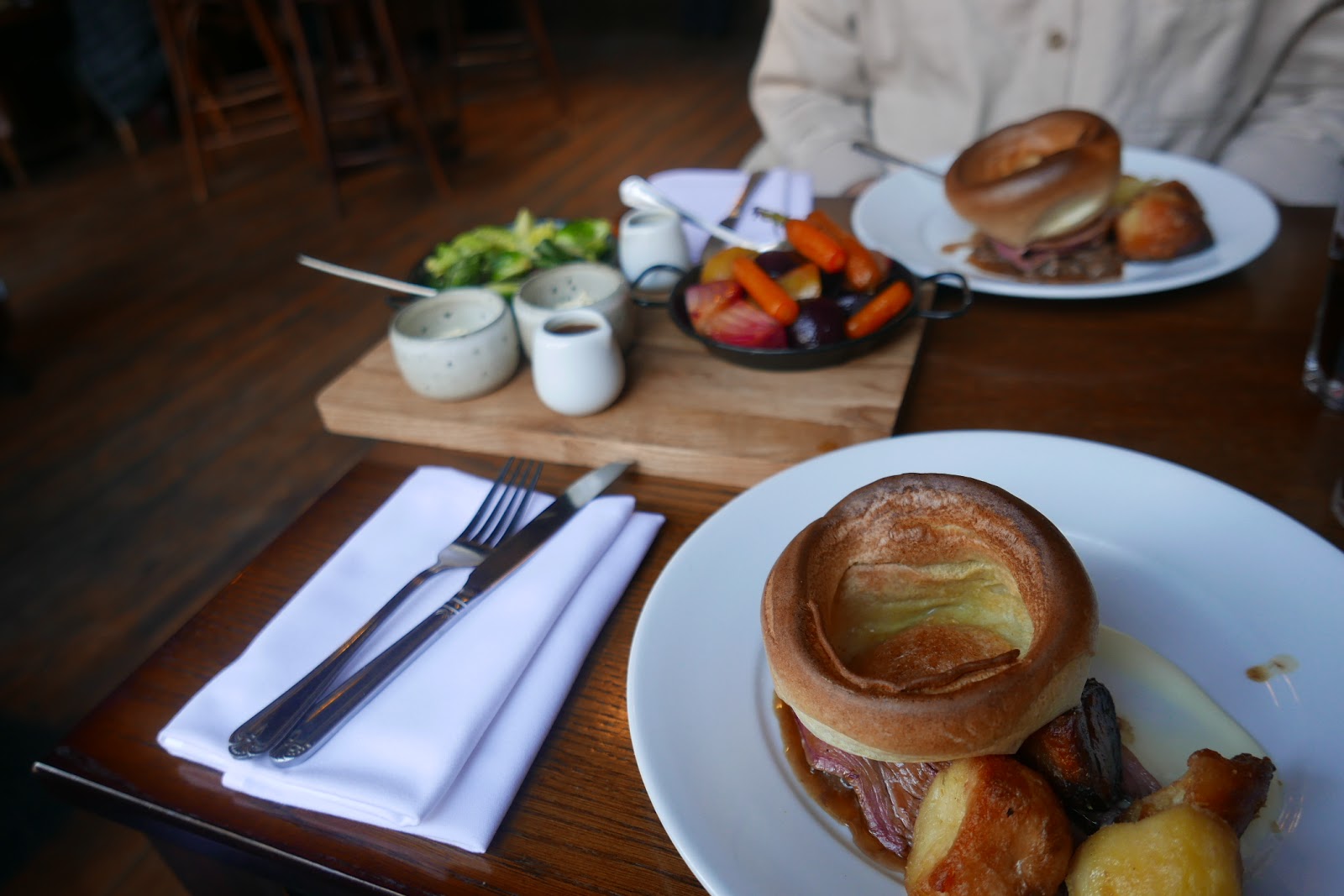 I would genuinely go as far as to sat this is probably up there in my top three of roast dinners out (obviously nothing beats homemade). I asked for extra gravy (I always do, I’ll admit I like my food to basically be swimming), but other than that it was perfect. Lots of nice veggies, crispy potatoes, meat cooked exactly how I like it with a big Yorkshire pudding on top… but the bonus points were definitely awarded for the cauliflower cheese. I have a bit of a thing about cauliflower cheese, it just makes me very happy. As did this roast, in case you couldn’t tell. If you ever find yourself in Clevedon on a Sunday then I would recommend going to the Limehouse as it was delicious. 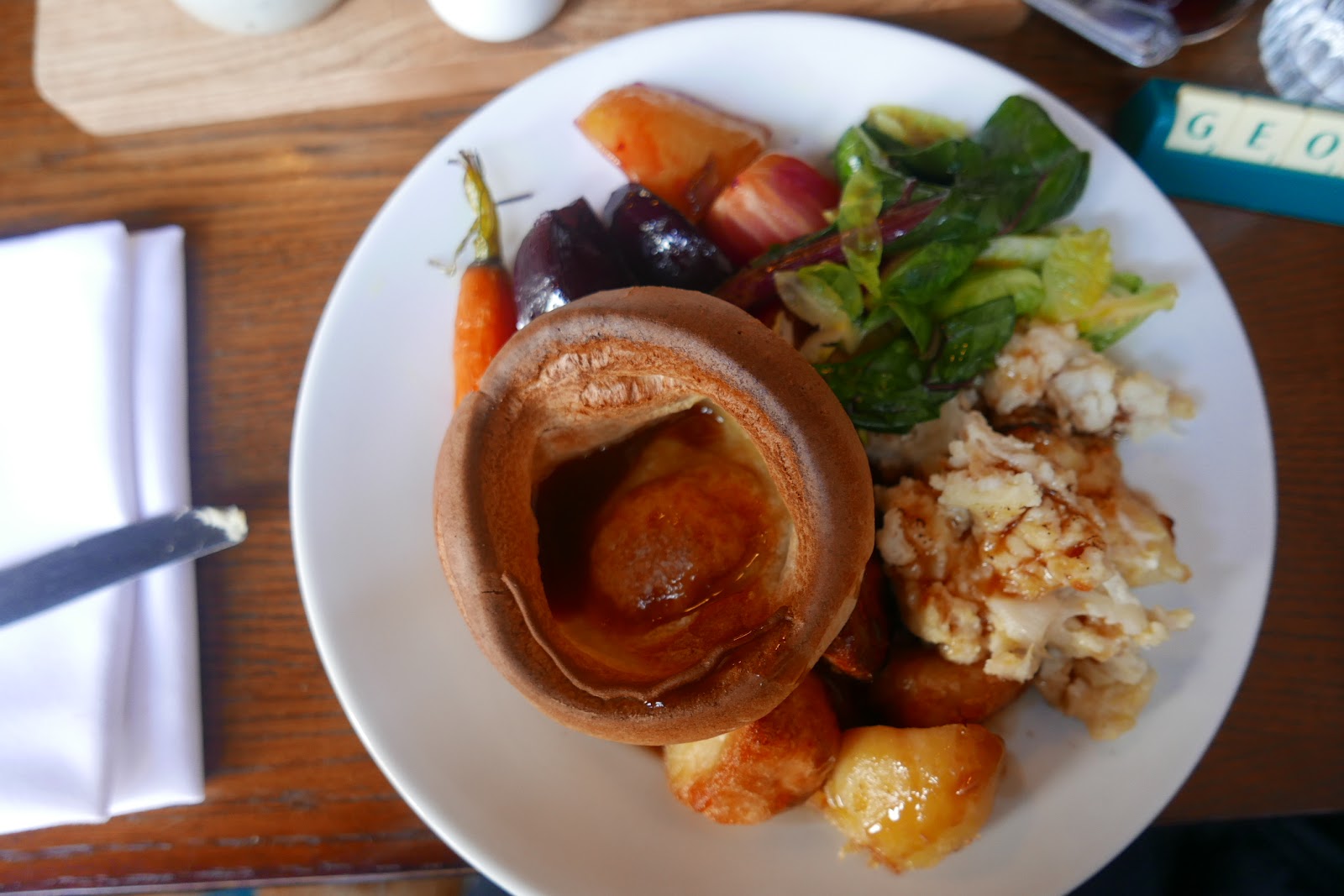 The Limehouse itself was somewhere I decided I really liked, due to the great service and décor. We’d been given some complimentary warm homemade bread and butter whilst we waited for our food which really yummy. The place itself was an eclectic mix of wooden beams wrapped in fairy lights to mix matched photographs of different shapes and sizes hung on the exposed brick wall. It had a cosy yet cool vibe to it, with old fashioned pieces such as the fans on the ceilings, but styled in a contemporary way. 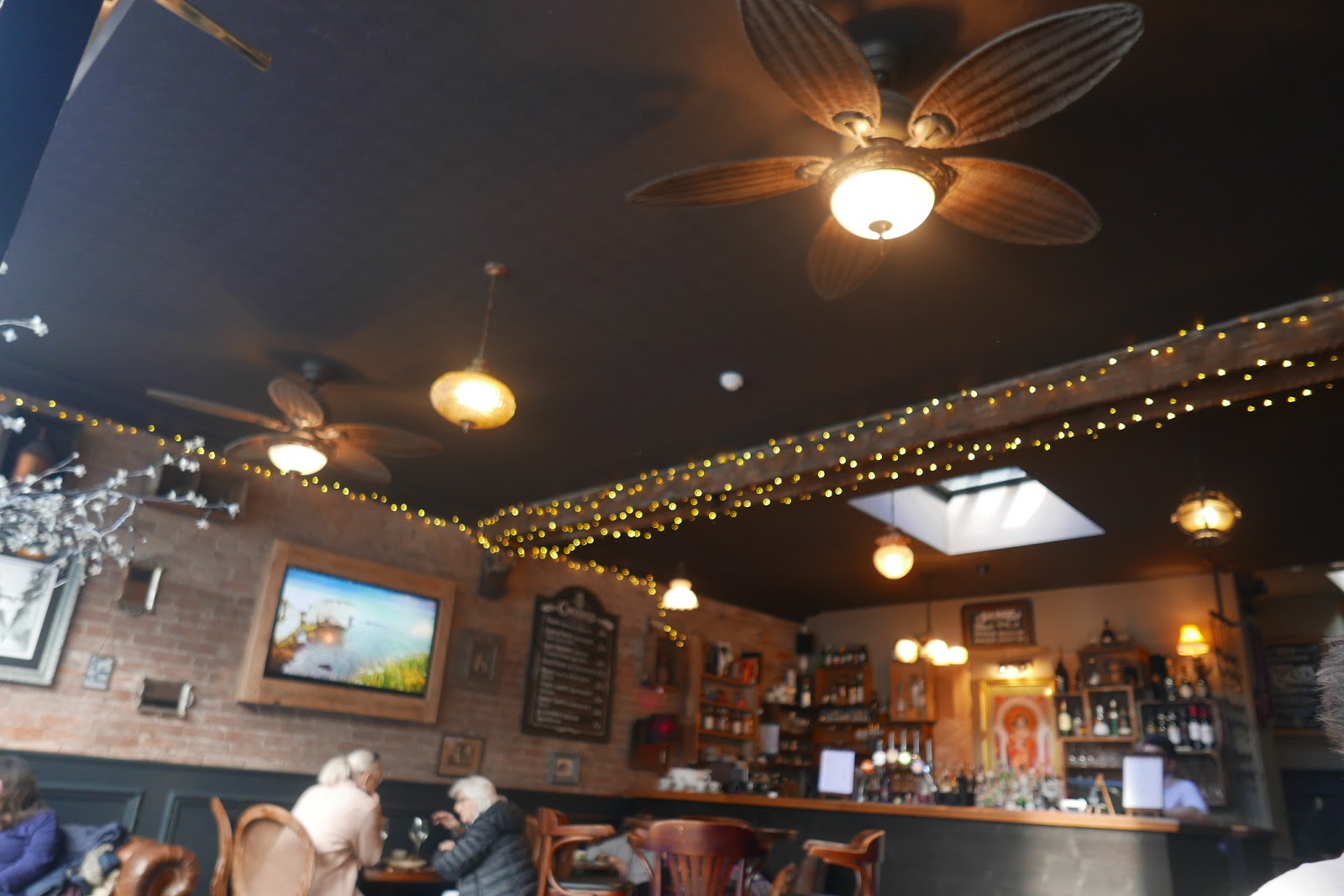 After our food we decided to head back to Bristol (and play Guitar Hero, of course), but we’d had such a lovely day out in Clevedon. I’d definitely recommend paying a visit, whether or not you have a reason – I’m glad that we did!